Pointe Marine is located in North Muskegon, MI, on both sides of the Bear Lake Channel. We are a member-owned marina, offering share owners and renters the opportunity to enjoy what we believe is one of the best marinas in West Michigan, We offer our members a permanent slip and our renters a guaranteed slip for the season and usually beyond.

All slips have parking available just a few steps away from your boat. No long piers to cart all your gear down and plenty of green grass for your picnic table right in front of your boat.

When the weather starts turning too cold to enjoy boating, we offer many options for storing your boat for the off-season. Our storage capability includes heated indoor, indoor cold and outdoor storage, all include bottom cleaning and spring launch. We also offer an excellent service department that is available year around for your service requirements.

Some of our other amenities include three separate bath houses with shower facilities, a club house with a full kitchen available for your use, dog walks, a fish cleaning station and really great neighbors. 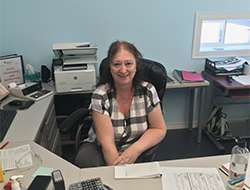 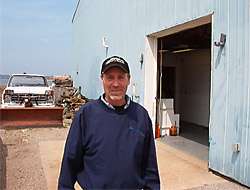 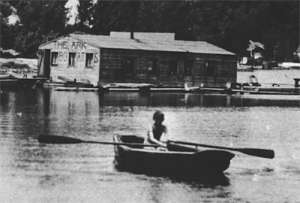 When our group bought Pointe Marine, there was a building about where the heads and fish cleaning station on the west side are now. It had been a small mom & pop restaurant called The Lunch Box, until shortly before we bought the marina. A couple of years later we moved our office into this little building and had a small ship’s store there as well. One day the young lady I mentioned in an earlier article called to tell us that she was being annoyed by a large swarm of “moths” in the building. When we investigated, it turned out the “moths” were actually a swarm of termites. The building had an old skirt around the bottom, and it turned out that this covered a multitude of sins. The building was actually sitting on several enormous logs from the lumber era which sat right on the ground, a setup irresistible to termites. The history of this building turned out to be fascinating.

It was originally built by the Cihaks as a floating ark. During the winter it was anchored in different places in Muskegon Lake, and people could walk out and go perch fishing in relative comfort inside the building.. I have a picture of it anchored off Pigeon Hill in my reception room. They sold sandwiches and bait. I am not sure how they kept them separate. At certain times, when the ice was not so thick, The Ark, as it was called, would wander around Muskegon Lake, especially when we had a heavy NW wind. The Coast Guard took a dim view of this, and I understand that there were warnings issued. One day, after a particularly heavy wind, our little Ark broke loose and ended up banging against the side of the Milwaukee Clipper. (Horrors) Now the Mart Dock folks as well as the Coast Guard got real uppity about this, and the Ark’s career as an ark was over. The building was dragged ashore to where it was located when we bought the property, and became a marina store. The store sold outboard motors, tackle, bait, etc. 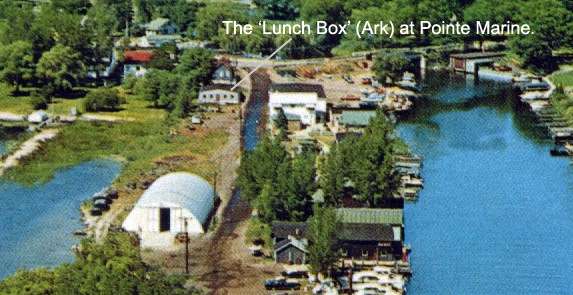 I am including a picture of it at that time. In due course, the business was closed. (editors note: This picture is probably from the early 1950’s. Just look how high the water was. It even flooded the west side road.)

Enter Bert & June. June was a marvelous cook. They had a thriving business in The Lunch Box. Many of us flocked there for some of the best hamburgers you ever ate. Her sandwiches were superb, and her dinners were just like the best home made. Pies and desserts were scrumptious. Little matter that they occasionally had a little problem with the Health Department. As the fortunes of Michigan Marine, which owned the marina, declined, theirs was on the rise. Bert got the job of running the gas dock.

One day Judd Kovalak and I were onboard Guliver talking about our upcoming summer trip, and decided to go up to The Lunch Box for lunch. Bert was out in the back of the building at an old table cutting up a roast. At this point a boat pulled up to the gas dock and Bert wiped his hands on this apron, covered the meat with foil, and went to pump gas. He also checked the oil on both engines, then wiped his hands on his apron and headed back to cut more meat. In the meantime, the ducks had not been idle. After all, they did know where the goodies were, and flew up on the table to help themselves. Bert promptly shooed them off, sat down, and continued to cut meat. After watching this, Judd and I were not near as hungry as we had been. We discussed the possibility of this combination of motor oil, gasoline, ducks, flies, and fresh air added to the flavor of cooking.

Shortly before the purchase of the property, Bert & June closed The Lunch Box to take the restaurant at the Downtowner Motor Inn on Muskegon Ave. This was a short lived venture because the motel closed soon after. Bert himself became a bit of a celebrity a short time later. Old Dr. Kislov was a talented sculptor and he used Bert for the model of a bronze sculpture he made of a sumo wrestler.

Getting back to the building itself, we discussed our problem with the city. They had appraised rather high, and it was going to take an astounding amount of money to repair and treat the building, including jacking it up and replacing the log foundation from it’s days as an ark. We were not going to get any break on its appraised value, so the decision was made to tear it down. For the record, I do not have part of the building stored in my barn. It has been gone a long time now, but when it comes up in a conversation, it never fails to bring a smile to the faces of those of us that remember it, Bert & June, and survived eating there.